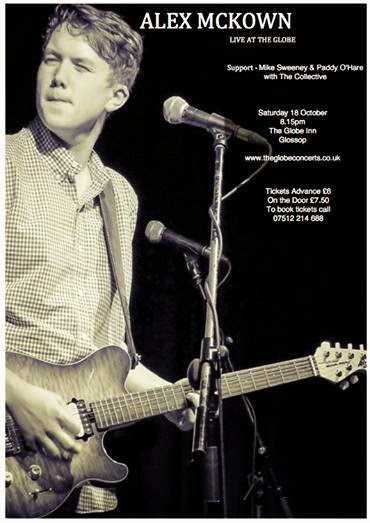 Alex McKown; blues prodigy, has been a finalist in the British Blues Awards for the last four consecutive years. His band consists of stellar musicians including Lee Buckle & Carl Meehan, who have performed, toured & recorded with the likes of Amy Winehouse, Rod Stewart & Beverley Knight to name but a few, and featured on two significant albums "The Cream of Electric Blues" and  "Suitcase Full Of Blues", alongside the likes of Joe Bonamassa, Walter Trout, Robert Cray and The Royal Southern Brotherhood.

"A Blues Prodigy" : Paul Jones BBC and The Blues Band

"A Talent Way Beyond his Years"  : Hamilton Loomis, Texas

"Brilliant Blues Not to be Missed" : MEN

Mike Sweeney and Paddy O'Hare are two musicians who’ve come together to write, record and perform their own interpretation of ‘Roots’ music. Taking their cues from The Blues, Country, Folk, Rockabilly, Rock n Roll and influences from the likes of Elmore James through to Woodie Guthrie, Mike and Paddy use a mix of acoustic and retro-electric guitars, harmonica, banjo, mandolin and Cajon to produce a unique amalgam of them all.