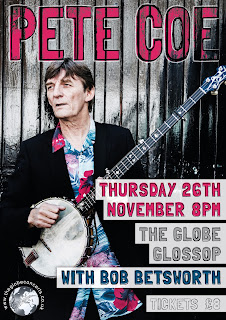 "it may be easier and quicker to list the talents that Pete Coe doesn’t have." Andy Kershaw, BBCworld

“Pete Coe in many ways represents the backbone of the modern folk revival. A fine solo performer and an energetic activist for the scene as well, founding Ryburn 3 Step, running folk clubs, dances and workshops in  Ripponden and beyond while also teaching music and dancing in schools. He's still one of the most committed, most versatile, most important folk artists in Britain.”
Colin Irwin  MOJO

"Every aspiring young performer needs to watch this man whose driving, footstomping delivery on a variety of instruments and outstanding voice is an object lesson in regard-for-your-audience basics.”
Paul Davenport, English Dance & Song magazine

“This outstanding album ably demonstrates that not only is his strength undiminished, his hunger for exploring the music and presenting it in new and interesting ways is as keen as ever.”
fROOTS

“Each song is rejuvenated by Pete’s approach – and he even allows himself a little rewriting and always to the song’s advantages. He treats songs and tunes as trusted friends and they return the compliment. Each Pete Coe release over four decades has been a rewarding discovery and, more importantly, a welcome place to return to many a time and often.”
Tykes News