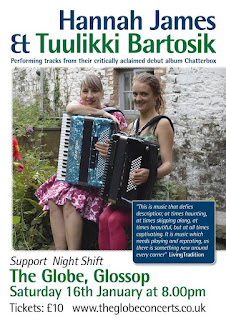 "English accordionist Hannah James (also credited for clogging) has teamed up with Estonian/Swedish counterpart Tuulikki Bartosik (free bass accordion, voice, metallophone) for Chatterbox, and their musical affinity is clear. Some of the tracks, including the sweet Cave Calm, were recorded in an actual cave. The traditional Swedish composition Leksands Brudmarsch is sweet and what's not to like about a song with the title Walk of the Naughty Accordions. An evocative album, including the lovely cover artwork by Coucou." Martin Chilton, The Telegraph

"Have to admit, I've never before mastered something that has been played in an actual spacious cave where you can hear the water dripping in the background. A special treat for me definitely! You can hear the end result in the track called "Cave" so give it a listen."  Minerva Pappi, mastering engineer, Chartmakers

"‘Chatterbox’ by Hannah James and Tuulikki Bartosik - a wholly original and mesmeric album...Chatterbox’ is a lush piece of work suffused with original compositions, traditional tunes and sparkling improvisation. Both artists agreeing that: “It’s making music in the here and now. There are no filters, it’s just about what happens in the moment.” Couldn’t have put it better myself. Listen to ‘Chatterbox’ you’ll love it." Charlie Elland, FolkWords

"I am very happy to say that in the case of Hannah James and Tuulikki Bartosik that they click amazingly and have created a gem of an album that I think will be near on impossible to top in the accordion world. A wonderful celebration of accordions." Paul Rawcliffe, FATEA

"There’s a refreshingly joyful musical relationship at the heart of the new album Chatterbox, by accordionists Hannah James and Estonian/Swedish musician Tuulikki Bartosik. Two women known in their respective countries for resisting the confines of musical tradition, they’ve created a piece of work which is bold, exciting and completely original. Showcasing the accordion’s versatility through assured musical interplay, improvisation and new compositions, and marked by a genuine sense of adventure, this is not like any accordion album you’ve ever heard." Joanie Crump, director of the Headland Folk Festival, UK