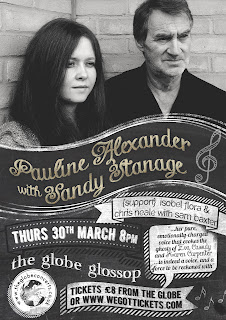 
Pauline Alexander is one of Scotland's finest singers who hails from the East End of Glasgow.  Her beautiful vocals are reminiscent of Sandy Denny with their easy on the ear and centred style.   Performing as part of an acoustic duo, she has been accompanied by various guitarist over the years and currently performs with the founding member of Kentigern and fine virtuoso fingerstyle guitarist; Sandy Stanage.

Pauline regularly plays at festivals and clubs around the UK, bringing with her a blend of original and interpreted song from a range of genres that include contemporary, folk & blues.

"Pauline is surely one of the finest voices to have emerged in the Scottish folk scene in recent times.  Her eclectic repertoire, fine presentation, with tasty guitar accompaniment by Edwin, earned the pair a standing ovation at the Edinburgh Fringe."
Paddy - Wee Folk Club