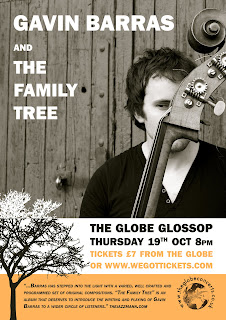 Gavin Barras is a professional double bass and electric bass player based in Glossop, who has an established presence on the Manchester jazz scene. He performs regularly throughout the UK and abroad in a variety of performing and recording projects. Gavin’s new album The Family Tree contains ten new compositions all written since becoming a father in 2016. The record also features Gavin playing a double bass built by his own father, a keen stringed instrument maker, who spent 15 years building the bass as a labour of love for his son. The other themes of the album include friendships, childhood memories, family connections and Gavin’s home in the Peak District. The band features Jeff Guntren on tenor saxophone, Jim Faulkner on guitar and Dave Walsh on drums. Recorded in one day at 80 Hertz Studios in Manchester, The Family Tree also has two tracks with Gavin on acoustic guitar (again built by his father – this one back in 1967), Rhiannon James on viola and Margit van der Zwan on cello.

Tickets £7 from The Globe or www.wegottickets.com

"In many ways the emphasis is more on Barras as a composer. After years in the relative shadows as an in demand sideman Barras has stepped into the light with a varied and well crafted and programmed set of original compositions. “The Family Tree” is an album that deserves to introduce the writing and playing of Gavin Barras to a wider circle of listeners." thejazzmann.com

"Best known as the bassist with Matthew Halsall's band this album features Gavin Barras playing a bass specially built for him over a 15 year period by his father. Mostly played by a tight core four piece band, Barras' album features 10 compositions written since becoming a father himself in 2016. Jeff Guntren plays a mean tenor on "Swingin' Charlie" and the band combines well on "Steve's Song" -a breezy rhythmic showcase for both Barras' own considerable talents and those of Jim Faulkner on guitar. The title track springs a surprise by introducing cello and viola to the mix to great effect, but the overall feel is of warmth, family and friendships. An enjoyable way to spend 50 minutes." Allthatjazz.com