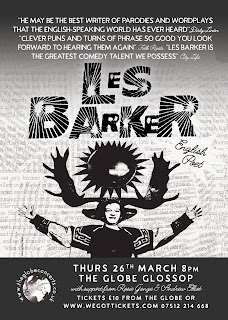 The Mrs Ackroyd Band - supplemented by guest members such as June Tabor and Martin Allcock - has released five albums;Oranges & Lemmings', 'Gnus & Roses', 'Tubular Dogs', 'Yelp!'. and 'Dark side of the mongrel'.

In addition there are five highly acclaimed albums of his serious work; the folk opera 'The Stones of Callanish', 'Some Love', 'The Wings of Butterflies', Airs of the Dog' and 'Twilight of the Dogs', all involving a galaxy of talent. His serious songs have also featured on albums by Martin Carthy and Dave Swarbrick, and by June Tabor. June invariably includes a smattering of Mr Barker's serious and comic songs in her live performances. The Kingston Trio and Tom Paxton have also recorded Mr Barker's songs'.

Les and the Mrs Ackroyd Band burst furtively onto national radio with a series of six programmes for BBC Radio 2 entitled 'Mrs Ackroyd explores her roots'. A new, and much larger audience were led in ever decreasing circles by Mr Barker's strange mind. A growing number of radio programmes worldwide are featuring his recorded work. Dr Demento has included the Mrs Ackroyd Band's performance of 'Dachshunds with erections can't climb stairs' on one of his compilations, and 'Will the turtle be unbroken?' on another; and 'Reinstalling Windows' on the next one.

There is also a double CD of Mr Barker's work performed by a vast number of TV & radio personalities, 'Guide Cats for the Blind' and several sequels, 'The Missing Persians File', ‘Top Cat, White Tie and Tails', 'Catnav' and 'Herding Cats.'

Mr Barker has also translated Daniel Owen's novel 'Enoc Huws', and in has co-operated with a friend, Malcolm Weindling, to produce a computerised Welsh rhyming dictionary.

What else can one say about Les Barker? He was Old York Victoria's footballer of the year in the season when they finished top of the Altrincham League. He has run a marathon in two hours forty one minutes; but he was younger then. He's very difficult to describe. But there's only one of him. Go and see him (and buy some of his books). 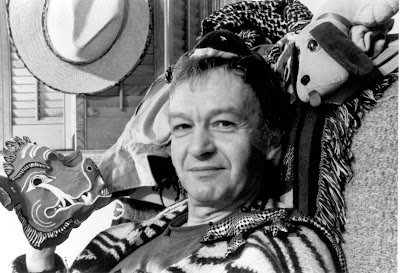 ...he may be the best writer of parodies and wordplays that the English-speaking world has ever heard.
-Tom Nelligan, Dirty Linen

There are subtleties which you didn't notice the first time round, and there are clever puns and turns of phrase so good you look forward to hearing them again.
-Caroline Walker, Folk Roots

This man is a genuine genius of comic rhyme who appeals to people of all ages with a truly entertaining family show. I have seen him reduce a whole marquee full of festival goers at Victor Harbor to a mass of helpless laughter and aching sides.
-Ron Ashton, Port Lincoln Times, Australia

Les Barker is the greatest comedy talent we possess....This is probably the funniest tape I have ever heard. He's a master at exploiting the idiosyncracies of the English language, weaving in myth and history to build bizarre stories.
-Agraman, City Life

Les, long known as an inveterate punster who reads his improbable verse monologues to increasingly hysterical audiences, wrote that serious and attractive tale, the Stones of Callanish. But it was the comic Barker that then entertained this audience with his other new direction, the Mrs Ackroyd Band.
-Barry Seddon, Manchester Evening News.

This man even sells his own underwear. He was a big hit at the Winnipeg and Vancouver Folk Festivals in the summer with the Mrs Ackroyd Band. Now he's tackling Canada all by himself.
-Steve Edge, Rogue Folk Club

The man's a comic genius with a solid presence in folk music and at folk festivals.
-Don Mills.

Depending on your state of health this man could be a real tonic to your wellbeing or fatal. Mostly he's a ray of sunshine capable of brightening up the darkest day.
-Kevin Meehan

He proved a masterful wordsmith, captivating listeners with his quirky verse and playful personality, touching on occasional tables, snails in a fast food restaurant and dachshunds with erections. His gallery of unlikely heroes included Cosmo the fairly accurate knife thrower, Arnold the Armadillo and Spot of the Antarctic. Truly a prince of the pun and sultan of the surreal.
-Jo Laval

Les Barker proves that poetry can indeed be entertaining, dazzling the audience at Artworks with poems from his huge range of published works. His cardigan clad, unassuming manner on stage as he peers shyly at the audience through his spectacles, and his soft Manchester accent delivers the brilliant flow of words and ideas, leaving the listener gasping with laughter.
-Gulf News, New Zealand


At his best, he is an inspired genius. The only man who could produce work to match 'Deja vu' was the late great Spike Milligan.
-Dai Woosnam

...a poetic onslaught of humor and thought....able to go bouncing through ludicrous situations.
-Sing Out

Les Barker is more than silly; he is probably one of the silliest performers ever to grace Godfrey’s stage, and in a way that only a Brit could be silly. Part poetry, part monologue, but surely one of the most side-splitting evenings you can have. If you enjoy hearing the pun elevated to a true art form, this is the place to be. How can intelligence be so damned funny?